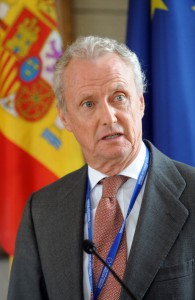 An international military intervention is needed to end unrest in Libya, where Daesh is gaining a foothold, Spanish Defence Minister Pedro Morenes said in an interview published Saturday.

“We went to Afghanistan to stop all of that from coming here, we are in Iraq, Mali or Somalia with the same objective. And now we have it nearby. Something needs to be done,” he told the top-selling Spanish daily El Pais when asked if there would be a military intervention in Libya.

“I asked (EU foreign policy chief Federica) Mogherini in Singapore (last weekend) and she said: ‘It seems unbelievable that there are still nations that object (to an intervention). Think of Syria. For four years we have watched them massacre each other while the (UN Security Council) is blocked by vetoes. This is the world we live in’.”

Morenes reiterated Spain’s support for an Italian proposal calling on the US-led coalition that is fighting Daesh in Syria and Iraq to expand its operations into Libya.

“If the caliphate extends to Libya, the coalition will have to take action,” he added.

Libya descended into chaos after the 2011 NATO-backed uprising that toppled and killed Muammar Gaddafi, with battle-hardened and heavily armed former rebels carving out their own fiefdoms across the country.

The north African country has two rival parliaments and governments, with Tripoli controlled by Libyan Dawn forces who seized the capital last year, forcing the internationally-recognised government to move to Tobruk, in the east of the country.

The chaos has turned Libya into a staging post for migrant smuggling across the Mediterranean to Europe, and there is mounting alarm over gains made by extremists like Daesh.

The group released a video in April showing masked fighters beheading dozens of Ethiopian Christians in Libya. Last month, it released another video showing Libyan fighters pledging support for Daesh and staging a series of attacks and summary executions in the eastern city of Benghazi.

Western powers including Spain, which this year holds a non-permanent seat on the Security Council, have insisted on a political solution to the unrest in Libya but have not definitively ruled out another intervention.

Morenes suggested however that any action in the country would need to have the approval of the Libyan government.

“Libya is a sovereign state, regardless of who is in charge there,” he said when asked if military force could be used in Libya to stop human trafficking.