You are here: Home / Europe / Spain arrests four including two teens planning to travel to Syria 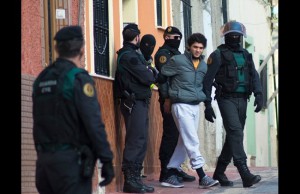 Two young teenagers were arrested early Tuesday in northeastern Spain, the same morning they planned to travel to Syria to fight with Islamist militants there, the Spanish interior ministry said.

Police arrested the two, both aged under 16, and another two suspects in a raid in the Mediterranean city of Badalona, about 11 kilometers from Barcelona.

“A brother of the minors had already traveled to Syria, recruited by jihadi groups, dying in 2014, and is believed to have formed part of the terrorist ranks supporting Daesh (ISIS),” said the ministry in a statement.

The ministry said the teenagers had dropped out of school in Badalona and begun studying at an Islamic center in Morocco. They were due to travel Tuesday morning through Morocco to Turkey and from there onto Syria with the full knowledge of those close to them including their mother, said the ministry.

Since the attacks on satirical newspaper Charlie Hebdo in Paris earlier this year, Spain has stepped up efforts to prevent recruiters from militant groups targeting young Muslims.