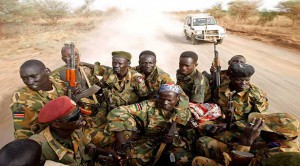 The war in South Sudan has continued to escalate and ravage the poor nation with no end in sight and it seems much of the world hardly takes notice. Lives are lost at an alarming rate that in certain places where it is worst, people no longer bother to count the number of the dead. A civil war is like a body in a self-destructive mode. It is the worst thing that can happen to any nation. Recovery can take years. Even with that, the scar remains.

In what has been termed a “senseless war”, civilians have become the main target as soldiers of the two warring sides have no time for rules of engagement. Children watch their parents’ throats slit and they too have become victims of the massacre. Boys have been castrated and left to bleed to death. Girls as young as eight have been gang-raped. Some were raped and burnt alive.

Children who should be in school have become soldiers without even knowing why they are fighting.

An estimated 1.5 million people are now refugees. Hunger and disease compete with the soldiers for lives to take. For a once promising nation, it is tragic to see South Sudan’s dream turn to a nightmare.

There was this uneasy feeling when South Sudan was celebrating its independence as a new nation that made me write an opinion piece published in the July 21, 2011 issue of The Guardian, it was entitled, “More hurdles for South Sudan.” I told South Sudan to celebrate with “restraint” for I had a “déjà vu.” I also said President Kiir may be raising the constitution too early. That there might still be the need to work on it. Perhaps, in a country as diverse as South Sudan, a true federal system of government might be better.

I had added “Unfortunately, the way African countries are structured has always made it hard to exorcise completely the ghost of colonisation, and the attachment to ethnicity, sectarianism, and tribalism. Soon, the South Sudanese might begin to fight over the national cake. It is then they will remember “I’m Dinka,” “I’m Murle,” “I’m Nuer.” “Or, “Hey, the oil is on our own soil” No, it is our turn to rule”, and before you know it another carving knife. And the cycle begins.” I advised that “The country must guard against this.” I asked that “A proper political structure must be put in place.” And that “It should take care the infamous word “Kokora” derived from Bari local language which literally means ‘separation’ doesn’t come to haunt it.”

I also advised their leaders to read any book on how to be a bad leader, so that that way they would know how to rule. I concluded with “This new country cannot afford to fail. The snigger that would resound from its detractors will be deafening. Many Sudanese will genuinely miss their “kin,” but you can’t rule out a Pharaoh, and a few Egyptians.”

This was a country that the world had a lot of hope for. This is America’s foreign investment gone awry. When a lengthy and bloody war between the Sudanese government in the north and the South separatists raged on, President George W. Bush put his weight behind those in the south. President Bush also helped in the peace agreement in 2005 which brought about independence in July 2011.

Bush and Kiir became close friends so much so that the former gave him a Stetson hat which has become the latter’s trademark.

The ethnic and political struggle between President Kiir, and his former Vice-President, Riek Machar, has been responsible for a war that has turned internecine. A country that is not even four years yet has become the continent’s great failure.

It all started in December 2013 when President Kiir who is of the Dinka ethnic extraction, fingered Machar, who is a Nuer, of plotting a coup. It divided the military, and other ethnic groups supported either of them, and in no time, South Sudan began to bleed. All efforts by President Barack Obama’s administration, the United Nations and the African Union to broker peace have failed so far.

Perhaps, South Sudan is a lesson to those who are fixated on breaking away from another country, that it is no guarantee that there will be peace in the new nation.

Power is coveted in South Sudan because whoever has it has control of the nation’s oil.

The latest peace move by Kenya’s President Uhuru Kenyatta with the two warring leaders, like earlier moves, has led to nothing. But the country needs all the help it can get. America saw through its birth, so it must do more. Russia and China as allies cannot fold their arms.

There should be tough sanctions not only on the government but also on their big businessmen who may be heard by both sides. Arms embargo should be imposed.

Strikingly, illiteracy has a large role to play in this war. Only 27 per cent are literate, and so, many dwell on ethnicity and tribalism over nationalism. Also, as many are not educated, they don’t have skills for jobs or to create them. So tribes compete over few government jobs. And if one tribe is seen to be more favoured with the jobs, the government is seen to be unfair, leading to strife.

New schools should be built which bring the various tribes together to build unity and nationality. South Sudan’s leaders also need tutelage on democracy and the rule of law. It is unfortunate that the general elections which were billed for 2016 have been shifted till 2018 because of a breakdown in the ceasefire agreement. A free and fair election can go a long way. The extension of Kiir’s tenure by whatever reason, no matter how genuine, will prolong the war unless something changes.

We know Nigeria has its own problems but it must not lose its “birthright” as Africa’s big brother. President Muhammadu Buhari should use Nigeria’s experience in Liberia to also help bring peace to South Sudan.

Suffering South Sudanese are in a desperate situation. They need all the help they can get.