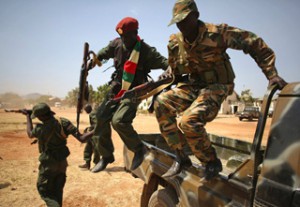 South Sudanese government forces have on Monday launched surprise attacks on rebel-held territories in a move seen as a violation of the peace agreement signed by South Sudan’s rival leaders, rebel Spokesman has announced.

James Gatdet Dak, the official Spokesperson for the leadership of the Sudan People’s Liberation Movement/Army-In Opposition (SPLM/A-IO), has released a statement declaring that government troops have launched coordinated attacks on rebel positions in the oil-rich Upper Nile State.

“Government forces have on Monday attacked SPLA-IO military base at Deba in Wedakona area in Upper Nile state. Government forces also shelled our military camp in Tubagiya, south of Malakal on Monday,” Gatdet said in a statement g extended to the South Sudan News Agency (SSNA).

The outspoken rebel official described the latest attacks as a “serious violation” of the power-sharing deal, adding that armed opposition forces managed to repulse Juba-backed troops, resulting in capturing of one of government soldiers.

“This unprovoked aggression is a serious violation of the Permanent Ceasefire Agreement signed between the parties. Juba forces were however repulsed and one of their soldiers captured,” he said.

The SPLM/A-IO Spokesman also said that South Sudan’s government troops also left one of their bases in Unity State and are moving toward rebel locations in Tunga and Kodok.

“Another force from the government has moved out from Parieng county of Unity state towards Tunga and Kodok with the aim to attack the SPLA-IO bases and designated cantonment locations in the areas,” Gatdet further elaborated.

In the document, Gatdet asserts that Salva kiir’s government is not committed to the implementation of the internationally-brokered deal and security arrangements, saying Kiir is only looking for a “military option.”

South Sudanese government has in recent days been accusing rebel forces of besieging Unity State’s capital, Bentiu. Rebels denies the accusation, saying Juba is lying and that Kiir’s government is simply using one of its deceptive techniques in an attempt to attack rebel forces and then blame it on the SPLA-IO.