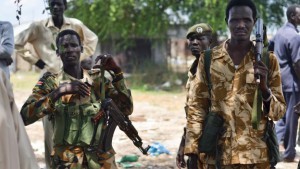 “This is a continuation of Salva Kiir’s undeclared policy of genocide against populations in the three states of greater Upper Nile region. The regime is starving these populations as another weapon of war to kill thousands more,” said the spokesperson of the rebel leadership, James Gatdet Dak, in a press statement.

He was reacting to the decision by the government which has prevented aid agencies from delivering food and other non-food essential items such as medical facilities and drugs by not using barges on the most effective route of the River Nile from the national capital, Juba.

Dak dismissed the allegations by government that the rebels were attacking humanitarian barges along the Nile that were delivering the relief assistance, saying this was a false pretext by the government in order to act inhumanly.

The government also restricted road and air transportation by non-governmental organizations (NGOs) to deliver food to the populations, which they said were under the control of the opposition forces, also citing insecurity as the reason for the decision.

But the rebel spokesman said Juba was still using the River to deliver heavy weaponry, munition and forces to reinforce its troops, adding that only military movements were the target of the opposition forces and not civilian or humanitarian deliveries.

Humanitarian agencies have issued statements in their outcry against the decision to restrict food deliveries to the suffering populations, saying unless the decision was reversed it will result to disastrous humanitarian consequences.

“Salva Kiir’s forces are busy preparing to attack areas of Panyijiar and Phom Al Zeraf counties. They have been building barges along the River Nile to use them for the planned attack,” Dak further claimed.

He called on regional and international mediation to condemn the action by the government which he said was seeking to starve the people of greater Upper Nile region by denying them the badly needed food assistance while at the same time preparing for more war in violation of the ceasefire agreement.

He pointed out that the situation was spoiling the atmosphere of the peace negotiations due to resume on 6 August.