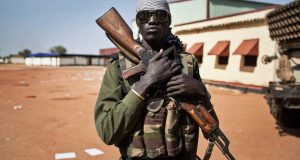 A confidential UN report is warning that the war in South Sudan has reached “catastrophic proportions for civilians” and the rise of militias risks spinning out of control, fueling fighting for years to come.

UN Secretary-General Antonio Guterres said in the report obtained on Tuesday that civilians were fleeing villages and towns “in record numbers” and that the danger of mass atrocities “is real”, like reported by scmp.com.

The stark warning followed a series of meetings that Guterres held with regional leaders and South Sudan’s President Salva Kiir last month to push for an end to the three-year war.

“The security situation continues to deteriorate in parts of the country and the consequent impact of this ongoing conflict and violence, has reached catastrophic proportions for civilians,” Guterres wrote.

Heavy-handed military operations by all parties, but especially by government forces loyal to Kiir, were “daily destroying homes and livelihoods,” said the report sent to the Security Council on Monday.

“The rise of militias under the loose command of the SPLA or rebel commanders is spreading the fragmentation and dislocation of its territories, which risk, if this trend continues, remaining out of any government control for years to come,” said the report.

Guterres has been pushing regional leaders like Uganda’s President Yoweri Museveni, who is close to Kiir, to put pressure on the South Sudanese leader to rein in his forces and pull back from the brink.

The UN chief urged the Security Council to take action to revive political talks to convince rebels to stop fighting and give the government legitimacy to seek international financial aid.

The United Nations has 13,000 peacekeepers in South Sudan, but they have repeatedly been blocked by government soldiers and rebels from areas where fighting has flared.

Last week, a peacekeeper on patrol in Eastern Equatoria was stopped by four soldiers, dragged out of his car and beaten, the report said.

Following his meeting with Kiir, Guterres reported progress on deploying a regional force under UN command to bolster security in the capital Juba.

Rwanda is poised to send troops and helicopters in a first wave of deployment expected in March or April while Ethiopia is also preparing to contribute forces.

But Kenya has yet to schedule talks on their contribution to the 4,000-strong force and a dispute over the force’s presence at the Juba airport is unresolved, the report said.

South Sudan remains a divisive issue at the Security Council after the United States failed in December to win support for an arms embargo and sanctions.

Russia, China, Japan and Egypt were among the countries that voted against a US-drafted resolution, arguing that punitive action would antagonise South Sudan’s leaders and further dampen prospects for peace.

Council diplomats point to the success by West African leaders in pushing Gambia’s leader Yahya Jammeh to abide by election results and cede power as proof that regional pressure can achieve results.

After gaining independence from Sudan in 2011, South Sudan descended into war in December 2013, leaving tens of thousands dead and more than three million people displaced.

There is growing alarm over the humanitarian crisis in the country where more than six million people – half of South Sudan’s population – are in need of urgent aid.