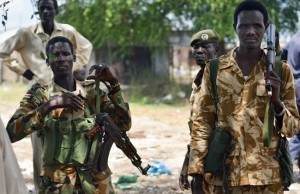 Fighters in the rebel-held northeastern town of Malakal, capital of the key oil-producing Upper Nile state, opened fire on the UN base, with peacekeepers returning fire.

“Any attack on a protection-of-civilians site constitutes a direct assault against the United Nations and may constitute a war crime,” the U.N. Mission in South Sudan (UNMISS) said in a statement, condemning the attack “in the strongest possible terms.”

“The wounded are currently receiving treatment at the hospital inside the UNMISS compound, and one is said to be in a critical condition,” it added.

Over 142,000 civilians are sheltering in U.N. bases across the country, and have been attacked previously by warring forces.

Civil war began in December 2013 when President Salva Kiir accused his former deputy Riek Machar of planning a coup, setting off a cycle of retaliatory killings that have split the poverty-stricken, landlocked country along ethnic lines.

A U.N. report this week described horrific violence in the latest fighting in the 18-month long war, where witnesses said the army gang-raped girls and torched them alive in huts.

On Wednesday, U.N. Security Council imposed sanctions on six commanders. The six generals – three from the government forces and three from the rebels – were punished with a global travel ban and an assets freeze for their role in the worsening conflict.

The European Union and United States last year had already slapped sanctions on three of those listed by the U.N., apparently doing nothing to stem the violence.

Four years since South Sudan won its independence, two-thirds of the country’s 12 million people need aid, according to the UN, and one-sixth have fled their homes.