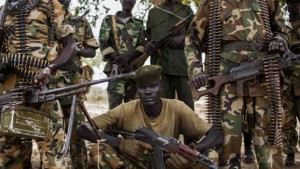 South Sudan rebels on Sunday accused the army of violating a ceasefire, just hours after it came into effect, by bombarding their positions along the White Nile River.

“A military convoy — two barges, seven gunboats — has been moving from Bor to Panijar. Whenever they see our positions on the banks, they shell,” said rebel spokesman Dickson Gatluak.

Bor is the capital of the eastern Jonglei state while Panijar is in Unity state. Both are on the banks of the White Nile.

“The cessation of hostilities started at midnight on Saturday but the government has broken it. They are not committed to it,” he added.

The spokesman added that the rebels would on Monday report the situation to the regional eight-nation IGAD bloc which helped broker the pact.

Neither the South Sudanese government nor the army was immediately available for comment while IGAD was unable to independently verify the rebels’ claim.

The ceasefire aimed at ending a brutal civil war in South Sudan came into effect on Saturday evening, hours after fresh clashes between government forces and rebels, which sparked concern for the hard-won peace deal.

The truce brokered by the IGAD bloc, along with the United Nations, African Union, China, Britain, Norway and the United States, came into effect at 2100 GMT on Saturday (midnight in South Sudan’s capital Juba).

On Saturday, South Sudan’s army and rebels accused each other of sparking fresh fighting in the preceding 24 hours in the north-east.

After the alleged ceasefire violations on Sunday it was unclear whether the peace deal would hold.

“We wanted to give the government some time to cease hostilities but on Monday we are going to notify IGAD and we will tell the world. The chairman Machar will give a press conference,” said Gatluak.

At least seven ceasefires have already been agreed and then shattered within days or even hours in the world’s youngest nation.

Over two million people have fled their homes in a 20-month conflict marked by ethnic killings, gang rapes and the use of child soldiers. Some 200,000 civilians are sheltering inside UN bases.

Army spokesman Colonel Philip Aguer on Saturday called on IGAD to establish a ceasefire monitoring mechanism “in all the counties”.

South Sudan broke away from Sudan four years ago to become the world’s newest nation.

The civil war began in December 2013 when President Kiir accused Machar, his former deputy, of planning a coup, setting off a cycle of retaliatory killings that has split the impoverished country along ethnic lines.

Faced with the threat of international sanctions, Kiir finally signed the peace deal but annexed a list of reservations that he said would have to be addressed for the deal to take hold.

Machar has said the reservations cast “doubts” on the government’s commitment to peace.

The UN Security Council on Friday threatened sanctions against anyone who undermines the accord.

The agreement gives the rebels the post of first vice president, which means that Machar would likely return to the job from which he was sacked, an event that put the country on the path to war.