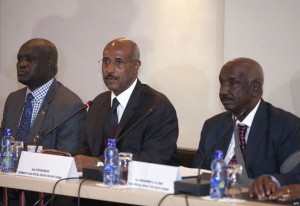 Under the mediation of the IGAD-Plus, the South Sudan peace negotiation kicked off on Thursday in Ethiopia’s capital Addis Ababa.

The East African bloc, the Intergovernmental Authority on Development (IGAD), has been mediating the peace process of South Sudan towards ending the crisis erupted since mid-December in 2013 in the world’s youngest nation.

In this latest round of peace talks, participants in the South Sudan peace process will, for some days, deliberate on the IGAD-Plus proposal, the Compromise Agreement on the resolution of the conflict in South Sudan.

At the recently convened meeting in Addis Ababa, the IGAD-Plus agreed on the urgent need to resolve the conflict, which has devastated South Sudan.

The IGAD-Plus mediation has put it that the Compromise Agreement is signed by August 17 towards resolving the crisis in South Sudan.

“The IGAD-Plus are united in their determination to see that the Compromise Agreement is signed by August 17, which will go a long way to ease the suffering of the people of South Sudan,” according to a statement released earlier by the mediation.

Speaking at the opening of this round of negotiation, Seyoum Mesfin, IGAD Chief Mediator, noted that the latest peace talks is a critical moment whereby the participants would make decision that might impact the destiny of the youngest nation and the people of the country.

“We have now reached at critical juncture whereby participants of this phase will make decisions that may impact the destiny of the people of South Sudan and their youngest nation,” said Seyoum.

The IGAD-Plus include the IGAD member states, the five members of the African Union High-Level Ad Hoc Committee, the Troika, China, the African Union Commission, the European Union, the United Nations and the IGAD Partners Forum.