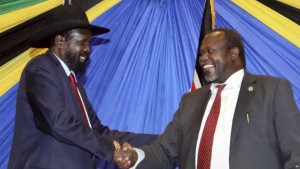 This is a hard time for the President of South Sudan Salva Kiir and his main rival, former Vice President Riek Machar. Unless they sign a final draft of a compromise deal prepared by IGAD-plus (the Intergovernmental Authority on Development), a group of East African nations, they will face certain sanctions by the international community.

IGAD has warned both sides that the draft deal, finalised 17 August, to end the 20-month civil war is their last chance.

African Union Chief Nkosazana Dlamini-Zuma told both sides that failure to agree “will have far reaching consequences of South Sudan, the region, and the continent as a whole”.

But renewed diplomatic efforts to have an agreement signed before the deadline of 17 August failed. Kiir asked for a 15-day extension to mull over the deal and questioned the ability of Machar to make it stick.

“Dr Machar has already been ousted and disowned by his army and politicians and if we sign peace we have to sign peace with all the factions and groups that are fighting in South Sudan,” said Martin Elia Lomoro, a minister of cabinet affairs in Kiir’s Juba-based government.

Lomoro was referring to an earlier statement in which several SPLM-IO (the Sudan People’s Liberation Movement in Opposition), the insurgent group led by Machar, announced that they were breaking away from the former vice president and would form their own political movement and militia.

The deal prepared by IGAD seems to favour the Kiir government in Juba, at least in some of its provisions. It allows President Kiir to stay in office, preside over the cabinet, chair the National Security Council and the Defence Council, and command the army. In return, Machar will regain his old job, this time with the title of first vice president.

To deter further outbreaks of violence, Juba will be disarmed and the army will be stationed at 25 kilometres from the capital. Both sides will be allowed to have their own separate armies during an interim period, to be merged within an 18-month period.

Observers are not optimistic about the current deal, noting that since the crisis broke out in December 2013, Kiir and Machar signed seven different agreements for a ceasefire, none of which endured.

Over the past 20 months, fighting in South Sudan claimed 10,000 lives, displaced more than two million people, and placed the country on the verge of famine.

The government has formed three committees to examine the IGAD proposals, while the opposition welcomed the deal and termed it fair.

The latest round of talks, which opened on 6 August, was organised by the eight-nation African group IGAD, the UN, the African Union, China, and a “troika” composed of Britain, Norway, and the US.

“There is talk about the failure of the peace deal proposed by IGAD. We want to tell people who think that peace would collapse because it was not signed by Kiir, to wait a bit before judging the results,” spokesman of the SPLM/IO in Cairo Gatkuoth Biel Nyang told Al-Ahram Weekly.

Kiir had requested two weeks to make consultations with his supporters. Then he will be back after 15 days with his final view on whether to sign the deal or not.

“If the Kiir regime in the South Sudan capital Juba fails to sign the accord after fifteen days, then they have to prepare themselves to deal with the regional block IGAD and the international community in order to end the suffering of South Sudanese people. The Kiir regime that instigated the current war refused to comply with the people’s desire for peace and we will have no other choice besides assembling and fighting against that illegal regime,” Gatkuoth Biel Nyang concluded.