You are here: Home / Africa / South Sudan military ordered to shoot down planes and helicopters 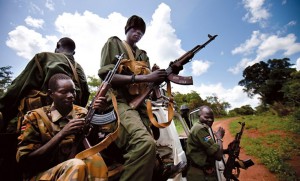 South Sudan’s military has ordered the shoot down of any airplane or helicopter flying into the country’s airspace without the knowledge of the government.  The order was reportedly given by General Paul Malong Awan, chief of staff of the Sudan People’s Liberation Army (SPLA), the military forces of the government in Juba.

Information Minister Michael Makuei said the government has evidence that some planes or helicopters have illegally been bringing weapons into the country.

But Ezekiel Lol Gatkuoth, secretary for foreign affairs of the rebels loyal to former Vice President Riek Machar said the rebels are calling on the Juba government to immediately withdraw the shoot down order because it undermines the implementation of the August 26 peace agreement.

He also said that the possible factor behind the order could be that the Juba government is not happy with the operations of the United Nations mission in South Sudan.

“They are basically targeting the relief agencies airplanes of the UN delivering food to the IDPs in their own country. I don’t know why he would be so agitated by the UN delivering food to a needy population. It’s another way of obstructing peace. We condemn it and we are actually asking General Malong to withdraw this order because it is not in line with the implementation of the peace agreement,” Gatkuoth said.

Gatkuoth denies that planes flying in rebel-held territories have been ferrying “illegal” weapons.

“There are no planes flying to our areas to bring weapons. If it is about weapons, you don’t need to get weapons from anywhere in South Sudan. We got them from the government when we were fighting. I don’t think this is the reason. It has to be more about the SPLA not being happy with the UN mission in South Sudan,” Gatkuoth said.

The new controversy over so-called illegal flights comes as both the rebels and the government are squabbling over the size of the rebel advance team that was supposed to have arrived in Juba as far back as the first of December this year.

“To our understanding, an advance team is a team of a reasonable size which is usually sent to go and work out the mechanism and look into any other outstanding issues before the big delegation comes. So we have not yet agreed on the number of delegates that will be arriving as an advance team, and as such we are still talking on this and we expect that we will agree soon so that the advance team will come to Juba,” he said.

He accused the international community of a double standard when it comes to the rebel advance team going to Juba.

Makuei said the South Sudan government has always been ready to implement the peace accord.

“The government has ever committed itself, and it is very clear in the last statement issued by the president to the national legislature,” Makuei said.

He said if there is any doubt about a commitment to the peace process the doubt could probably lie with the rebels.