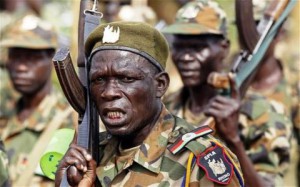 The army and rebels have repeatedly traded blame accusing each other of breaking an August 29 ceasefire deal, the eighth such agreement to have been signed since civil war broke out in December 2013.

Monitors from the regional East Africa bloc IGAD, which led efforts to negotiate the peace deal, said that on September 2, government helicopters attacked rebel positions outside Malakal, capital of the battleground oil-state of Upper Nile.

Monitors “witnessed the helicopter gunships flying towards and engaging” rebel forces on the west bank of the Nile, according to the report, which details violations up to September 9.

The army later fired on the rebel positions, with reports troops then crossed the river to stage a ground attack, the monitors added.

They recommended the government be condemned “in the strongest terms possible.”

Malakal is under government control but has swapped hands many times in the nearly two-year-old war, and rebels are based just outside the town.

Despite the fighting, both sides say the political deal remains in place, and on Tuesday, President Salva Kiir said he was “fully committed” to ending the war.

“Any violation will negatively impact… the ongoing implementation of the compromise agreement signed by the warring parties,” the report added.

The IGAD monitors also detailed attacks by rebel forces in Unity state, but which took place before the ceasefire was signed.

The world’s youngest nation, South Sudan descended into bloodshed in December 2013 when Kiir accused his former deputy Riek Machar of planning a coup.

The violence has left tens of thousands of people dead and the impoverished country split along ethnic lines.

The United States on Tuesday requested that UN sanctions including a global travel ban and assets freeze be imposed on South Sudan’s army chief Paul Malong and rebel commander Johnson Olony for their role in the continued fighting. Russia and Angola blocked that request.