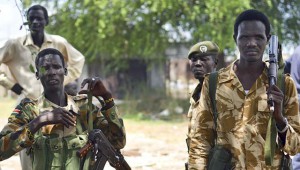 At least 275 people have died in fighting between government and rebel forces in South Sudan, officials from both sides say.

Jonglei Governor Phillip Aguer says rebels attacked the army barracks in the northeast town of Pajut on August 19. He says at least 242 opposition and 23 government soldiers died and 10 civilians were killed in the crossfire.

But a spokesman for the rebels, James Gatdet, says the army launched the offensive and that more than 300 soldiers and 30 rebels were killed.

The reports emerged after Sudan on Tuesday announced that rebel leader Riek Machar was in that country for “urgent medical attention.”