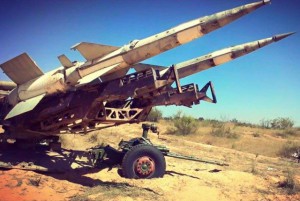 Although the associated target acquisition and engagement radars are not visible in the imagery, the number of 5P71s suggests South Sudan has four S-125 batteries each with four launchers. These are supported by an unidentified surveillance radar that can be seen set up on a dedicated pad.

The construction of the camp was completed between 28 March and 22 November 2013, when the launchers and the surveillance radar could be seen for the first time.

While there are no reports of South Sudan receiving SAM systems, the Stockholm International Peace Research Institute (SIPRI) has noted that its ally Uganda acquired four S-125s along with 300 V-600 missiles from Ukraine between 2010 and 2012.

Together with the numbers involved, the fact that no S-125s have been seen in Uganda suggests the ones reported by SIPRI were acquired by Kampala on South Sudan’s behalf. The initial deliveries were apparently made before South Sudan became eligible to import military equipment when it gained its independence from Sudan in July 2011.

Kenya is known to have provided the same service for 100 T-72 tanks that were delivered from Ukraine to the East African country in 2007-08 before being shipped overland to South Sudan.

While the SAM systems were presumably acquired in anticipation of renewed hostilities with Sudan, reports of Sudanese airstrikes during the heavy fighting around the oil town of Heglig in March-April 2012 suggest they were not operational at that time.

All the available satellite imagery shows the launchers lined up at their camp since November 2013, suggesting they have not been deployed operationally in that time period.