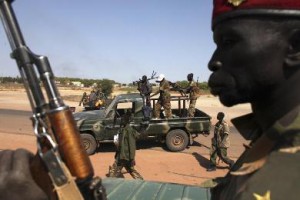 Speaking to reporters on Friday after the weekly council of ministers’ meeting, cabinet affairs minister Martin Elias Lomuro described usage of South Sudan by Islamist fighters as route to Sudan – and eventually to the Middle East, as a new potential security threat.

“The Ministry of Interior reported of potential presence of Al Shabaab and other Islamic organizations in our country,” said Lomuro.

“Apparently they (ministry of interior) have identified and apprehended 76 people who are of Kenyan and Somalis origin who were caught trying to cross into Sudan from South Sudan,” he said.

Of those arrested in Juba, thirty-three of the suspects had valid passports and three lack traveling documents.

“Forty (suspects) who are now in Aweil completely have no (travelling documents) on them. They are just moving across our country. We believe that they are related to Islamic organizations including Al Shabaab,” he said.

It is the first time South Sudan is reporting presence of Islamists that is fighting an internationally recognized and supported by African Unions troops and Somalis government.

Minister Lomuro said the group have not carried out any attack. He blamed the killings in South Sudan on local insurgency and rival tribal groups.

“Generally speaking, there are indications of increase in criminality, gang activity; inter-communal conflicts in various parts of South Sudan and particularly in Lakes [state] that have costed a lot of lives,” he added.

The minister further revealed that there are also armed groups, particularly in Western Equatoria state; in Maridi, Mundri, as well as in Wonduruba payam on Juba-Yei road and on Kajo Keji-Juba road.

It remained unclear what the government would do with the arrested foreign nationals and whether or not sure if they were truly belonging the terrorist groups.