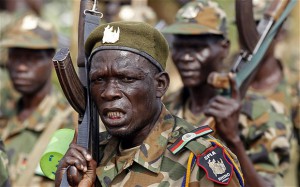 The spokesman for South Sudan’s army has expressed doubt about a recent United Nations report accusing the army of committing atrocities.

The report, which was based on interviews with 115 witnesses, accused the South Sudan army of committing atrocities including raping and burning women and girls alive in oil-rich Unity State between April and June.

Col. Philip Aguer dismissed the report as being without merit. He demanded an independent inquiry into the atrocities to determine who committed them.

“We are doubting the truth of this report because it was politically motivated,” said Aguer. “If it is a reality it has to be followed by a transparent investigation that will include the United Nations Mission in South Sudan, the SPLA [Sudan People’s Liberation Army] and other stakeholders to prove that really the army has committed such atrocities.”

“The suspiciousness is that the report is based on people that were interviewed within the camp of the United Nations in Unity State. And more than 90 percent of those in the camps are supporters of Riek Machar and supporters of the rebellion. And therefore, they would never say anything good about the government or about the army,” he added.

The conflict between the government and rebels loyal to the former vice president Riek Machar has left tens of thousands dead and displaced an estimated 3 million people from their homes.

But both sides have been accused of committing human rights violations in the ongoing conflict. Several attempts by regional leaders to help resolve the conflict have so far been unsuccessful, despite several peace agreements signed by President Salva Kiir and Machar.

Aguer questioned the timing of the report’s release, saying it was biased to bolster the stance of the rebels in the conflict.

“We feel that the report came at the time when Riek Machar rejected the agreement in Nairobi, and this to us is providing Riek Machar with tools of intransigence in which he is rejecting any agreement and taking this as a moral ground that he has a case. So the coincidence between the timing of the report and the rejecting of the rebels of the peace agreement is a concern,” said Aguer.

He said only an independent investigation could lead to those who committed the atrocities.

“We are calling for the report to be investigated, and if found that the SPLA committed these atrocities, those responsible must be brought to justice and court of law,” said Aguer.

“We are concerned because some of the atrocities that are mentioned they are not really part of our cultures and we have never burnt people alive as an army, even when we were fighting the real enemy of the people of South Sudan. This is why the army is concerned and we have to start the investigation immediately.”