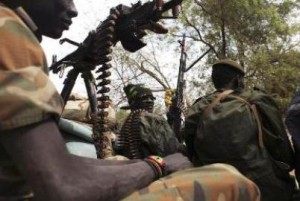 The South Sudanese government said it deployed more troops in the strategic Upper Nile capital, Malakal just hours after the opposition forces loyal to the country’s former vice-president claimed to have taken full control of the oil-rich town.

Upper Nile’s information minister, Peter Hoth Tuach, however, said fighting was still continuing, insisting that government forces were getting reinforcement from the army’s 1st and 7th division as well as the country’s special forces.

The move comes after government forces appeared to have recently gained some momentum by retaking control of territories from the rebels. But other foreign powers also appear to be getting more involved in the fighting, with Upper Nile state officials accusing unnamed nations of moving heavy artilleries across the border to back rebels.

South Sudan army spokesperson, Col. Philip Aguer said Malakal was still a contested town and that pro-government forces were still in control of the military situation.

“There is a fighting in Malakal. The rebels of Riek Machar have attacked the position of our forces but our forces are in control of the situation. They are using boats for shelling on our position,” Aguer said in a statement issued on Sunday.

In a statement issued on Sunday, the rebel leader’s spokesperson, James Gatdet Dak, said the town fell under full control of opposition fighters at around 10pm [local time].

“Upper Nile state’s capital, Malakal, is under our full control. It was captured at 10pm on Saturday,” he said.

“A joint force of SPLM/SPLA and Aguelek under the overall command of Major General Johnson Olony took control of the town. Government forces are being pursued towards Akoka, north of Malakal, in a mob up operation,” he added.

Dak said the recent fighting was provoked by government’s troops, who since Monday attacked the opposition fighters in Canal area in Jonglei state, near Malakal. He said the attack was repulsed and government troops were pursued into Malakal, resulting to the recapture of the strategic state capital on Saturday night.

He said heavy casualties were inflicted on the government, including capturing many war equipment. Sudan Tribune could not independently verify the armed opposition’s claims.

He said Olony early this week sent his delegation to Nairobi and conveyed the message to the rebel top leadership in an official letter he wrote to Machar.

“General Olony has officially declared joining the SPLM/SPLA. In his letter to the chairman and commander-in-chief, Dr. Riek Machar, he signed as commander of SPLM-IO,” he said.

“His delegation is currently in Nairobi and have met with the leadership to present the letter and work out some administrative details,” he said.

Dak accused the government of reneging on the peace process and carrying on with the offensive on positions of the opposition forces in violation of the cessation of hostilities agreement the two warring parties signed since 23 January 2014.

Talks collapsed on 6 March in Addis Ababa between the two principal leaders while fighting has since raged on. The recapture of the strategic oil-rich state capital is another blow to president Kiir’s government.

Saturday’s attempt by president Uhuru Kenyatta of Kenya to reconcile differences between the two top leaders in a face-to-face meeting at the State House failed to bear fruits.

IGAD-Plus mediation is yet to announce a date on which the talks should resume in the Ethiopian capital, Addis Ababa.