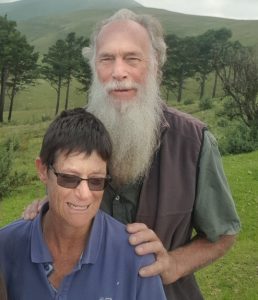 The search for the bodies of a British-South African couple allegedly abducted and murdered by a gang of ISIS supporters is ongoing on the banks of the Tugela River, like reported by northcoastcourier.co.za.

Rodney and Rachel Saunders disappeared in February while searching for rare plants in the foothills of the Drakensberg mountains near Vryheid.

In the weeks since their disappearance, the Hawks Crimes Against the State Unit, Durban Serious Organised Crime Unit and Durban Crime Intelligence KZN have arrested four people with alleged links to the ISIS terrorist group in connection with their kidnapping.

Two of the suspects, Sayfydeen Aslam Del Vecchio (38) and his wife Fatima Patel (27), had been living in Umdloti for more than a year before their arrests.

Thembamandla Xulu (19) and Ahmad Jackson Mussa (36) were also arrested in connection with the crime.

Del Vecchio, Xulu and Patel were arrested at the end of February and a search of their rooms led to a five-week manhunt for Mussa, who was eventually found hiding out in Newlands.

According to Hawks spokesperson captain Sipho Simphiwe, Musa led investigators to the banks of the Tugela, where the search for the bodies continues.

“At present we cannot charge the suspects with murder as we have not yet found the bodies. It is not easy with all the crocodiles in the water” he said.

“The suspects have been charged with kidnapping and robbery.”

Simphiwe said the Hawks did not suspect any others were involved in the kidnapping. He would not speculate as to the possibility of there being more ISIS linked groups in KZN.

Del Vecchio lived in Umdloti last year when he allegedly torched Tongaat Hulett sugar fields worth about R2 million, after they demolished a tree house that he built in a forest between Umhlanga and Umdloti belonging to Tongaat Hulett.

A few Umdloti residents with knowledge of Del Vecchio’s activities had apparently kept their suspicions about his activities to themselves so as not to create panic.

This was until Del Vecchio apparently painted the ISIS logo on a Tongaat Hulett construction site.

The incident scared a number of residents and was reported to the Hawks.

However they only took notice of him when he later painted the ISIS logo on the King Shaka International Airport boundary.