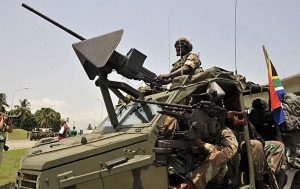 Nigeria’s ambassador to South Africa, Danjuma Sheni, said Nigeria was happy to have received South African support in the fight against Boko Haram, like reported by timeslive.co.za.

The revelation that South Africa had helped Nigeria with military hardware was made at a media briefing of the third session of the South Africa-Nigeria Defence Committee meeting in Cape Town on Wednesday.

It was agreed that South Africa would help Nigeria to set up its own military industrial complex.

Secretary for Defence Sam Gulube, who led the South African delegation, said both countries struggled with their defence budgets and procurement programmes.