You are here: Home / Europe / Son of extremist imam arrested over ISIS terror plot to attack Christians in a shopping centre with chainsaws 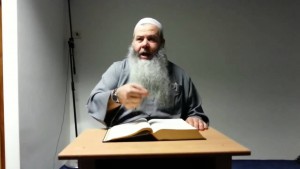 ISIS planned to use chainsaws to murder Christians in a shopping centre, according to the son of a radical imam.

The teenager, who cannot be named, told cops about the sickening plot when he was arrested after he was allegedly spotted in a video walking down a street and calling in Arabic for the murder of Christians.

The youngster is the son of radical imam Shayh Alami from the eastern Belgian city of Verviers – described by Belgian media as “one of the most important breeding grounds for Islamists in Belgium”.

In the short video which was published by Arabic-language media watchdog MEMRI, the young man can be seen walking in the streets of the city of Verviers in Eastern Belgium. He curses Christians and prays for their annihilation.

He reportedly admitted to police during questioning that the murderous terror group is recruiting people to carry out an attack in a shopping centre with a chainsaw.

The imam’s son said that two of those planned attacks involved a chainsaw massacre at a shopping centre, while in another terror plot an Imam was targeted because he was ‘not radical enough’.

Shayh Alami has been a thorn in the side of Belgian authorities for years, who have so far unsuccessfully tried to deport him.

Theo Francken, the Belgian Secretary of State for Asylum and Migration, is trying to deport the imam and has started to look at possibilities to deport his son as well.

Francken said: “I already signed the order to remove the Imam from Belgian soil. But he appealed the decision, so I can only hope for a quick sentence.

“Clearly radicalism runs in the family.”

Belgian newspaper “La Derniere Heure” reported that over the summer the young man confessed to investigators that ISIS are recruiting lone wolves in Belgium.

He allegedly said that jihadists who went to Syria were trying to convince those who stayed at home to launch terror attacks.

ISIS executioners reportedly used a chainsaw to slice nine youths in half in a gruesome public execution earlier this month.

A source told Iraqi News : “ISIS fighters have executed nine youths of Mosul. The outfit accused that these youths belonged to an anti-ISIS resistance faction

“The death sentence pronounced by ISIS sharia court stated that the men should be tied to an iron pole in the center of Tal Afar Square in Mosul and then sliced into two with an electric chainsaw.”

The lawyer of the youngster noted that the man himself it not a suspect in those terror plots.

According to local media, investigators searching the house of the boy who filmed him found a video message by one of IS’ leaders. In the video, the IS bigwig was calling for would-be terrorists to perpetrate attacks and to send him video messages.

The once well-off industrial city of Verviers in the Walloon region of Belgium has been in sharp decline over the last few decades and is currently one of the poorest cities in the country.

A number of anti-terror operations have recently taken place there.