You are here: Home / MidEastGulf / Some think Abu Bakr al-Baghdadi’s latest speech is a sign that Daesh is facing hard times 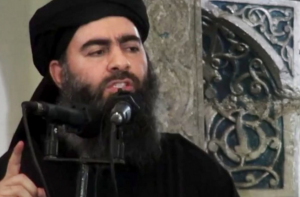 Amid various defeats and intense US coalition and Russian bombing, Daesh released a 23-minute-long speech said to be the voice of Abu Bakr al-Baghdadi. The audio recording is the first public statement by the leader of Daesh and self-proclaimed “caliph” in seven months. In it, he makes a series of threats and statements regarding Israel, the US and the Saudi-led anti-terror coalition.

“With the help of Allah, We are getting closer to you every day,” he says, referencing Israel in what appears to be a direct threat. “The Israelis thought that we forgot Palestine and that they had distracted us from it. That is not the case. We have not forgotten Palestine for one moment.”

There is some speculation that his words are a sign that Daesh is suffering heavily losses, and may be becoming desperate for more fighters. He references the increased intensity of the military campaigns against the extremist group, although dismisses any idea that Daesh is not doing well.

“Be confident that God will grant victory to those who worship him, and hear the good news that our state is doing well. The more intense the war against it, the purer it becomes and the tougher it gets,” he says.

In reality, recent reports show that Daesh has suffered heavily losses in recent weeks. Iraqi forces have retaken vast areas of the city of Ramadi, while a US-backed alliance of rebel groups and Syrian Kurds retook a dam under the control of its fighters.

The group lost the key city of Tikrit in Iraq in late March of this year.

The speech being released in the wake of this series of losses has prompted some to mock al-Baghdadi, arguing that he is nearing defeat.