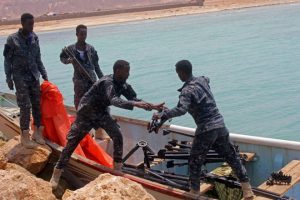 The authorities in the semi-autonomous northeastern Somalia state of Puntland have seized an assortment of weapons being smuggled into the country, like reported by theeastafrican.co.ke.

The Puntland coastguard announced the confiscation of the illicit consignment at a coastal area known as Mareero.

The coastguard spokesman, Major Mohamed Mohamoud Hassan, said his force intercepted a boat named Al-Furqaan, on which the illegal cargo was being ferried.

The region is about 1,500km northeast of Mogadishu.
The importers

Major Hassan also stated that the Puntland police confiscated a vehicle loaded with another consignment of weapons and ammunitions during an operation in Bossaso.
Both the police and the coastguard reportedly failed to apprehend the crew of the boat and vehicles with the illegal cargo.

However, the police stated that investigations into the importers of the weapons and their final destinations had started.
Puntland security officials believe the clandestinely imported arms were destined for the Al-Shabaab, the Al-Qaeda linked group, bitterly opposing the Federal Government of Somalia.