You are here: Home / Africa / Somalia’s new president declared the country a war zone and replaced its military and intelligence chiefs 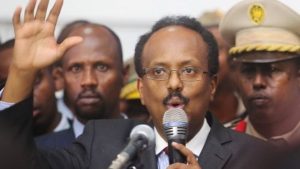 Somalia’s new president on Thursday declared the country a war zone and replaced its military and intelligence chiefs while instructing the army to prepare a new offensive against al-Shabab extremists, like reported by ap.org.

The shakeup is an attempt to improve the worsening security situation as the al-Qaida-linked al-Shabab steps up deadly bombings in the capital since President Mohamed Abdullahi Mohamed was elected in February. A car bomb blast on Wednesday at a Mogadishu restaurant killed at least seven people.

The Somali-American president wore a military uniform as he declared the new offensive and offered young extremists a chance to surrender.

“We tell the young, brainwashed al-Shabab fighters that they have a 60-days deadline to lay down the arms with which they use to kill their people and come to us,” Mohamed said. “We shall welcome them with open arms.”

He said the government will focus on the security of the capital first, then the rest of the country.

The changes come roughly a week after the Trump administration approved greater U.S. military authority to pursue al-Shabab in Somalia, including more aggressive airstrikes as parts of southern Somalia will be considered areas of active hostilities.

Thursday’s announcement is seen as an attempt by Mohamed to consolidate power in this long-chaotic horn of Africa nation. He also replaced the country’s police chief and Mogadishu’s mayor.

Al-Shabab has denounced the new president as an “apostate” and warned Somalis against supporting him. The group has been pushed out of the capital and other major urban areas in Somalia by national and African Union multinational forces, but it continues to carry out deadly bombings and attacks in Mogadishu and elsewhere. Targets have included hotels, military checkpoints and the presidential palace.

Somalia’s security forces are under pressure to improve as they will assume responsibility for defending the country once the 22,000-strong AU force leaves by the end of 2020.

Al-Shabab is just one of the challenges facing the new government, which despite hundreds of millions of dollars of support from the international community still struggles to expand its authority beyond the capital and other selected areas.

Drought threatens about half of Somalia’s population of 12 million, the United Nations has said, and hijackings of cargo ships off the country’s coast in recent weeks have signaled a return to piracy on one of the world’s most critical shipping routes. Somalia also is called the world’s most corrupt nation by Transparency International.