You are here: Home / Africa / Somalia’s government ban al-Shabab name from media: they are now “Ugus” 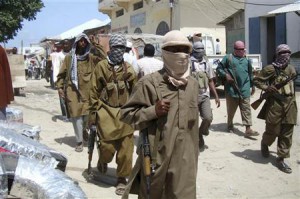 The Somali government has told media houses to stop referring to militant group al-Shabab by their name.

They instead want the group to be called Ugus, an acronym for the Somali words meaning “the Group that Massacres the Somali People”.

Al-Shabab responded by asking journalists to refer to the Somali government with the same acronym, Ugus.

In this case, Ugus means “the Group that Subjects the Somali people to Humiliation”.

Al-Shabab, which is affiliated to al-Qaeda, controls many rural parts of southern Somalia.

The head of Somalia’s Intelligence and Security Services Gen Abdirahman Mohamud Tuuryare told journalists that al-Shabab, which means the youth in Arabic, was “a good name”.

“We should not allow this good name to be dirtied. This enemy we are fighting is called Ugus.”

The government-controlled Radio Mogadishu and SNTV have already been using the term for a while.

The propaganda war between the Somali government and al-Shabab has been going on since 2009, when al-Shabab declared war on the then president of the Transitional Federal Government, Sheikh Sharif Sheikh Ahmed. Since then, the two sides have been exchanging derogatory messages through their media outlets.

Journalists in Somalia are now in a difficult position. They will have to either obey this order and face the wrath of al-Shabab, or refuse to comply with the government directive and face the consequences.