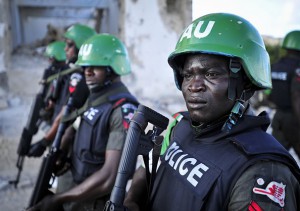 A military offensive has driven Somalia’s al Shabaab Islamist group out of major strongholds and deprived it of revenue sources, but its retreat to a southern valley and northern hills still poses a threat, the U.N. envoy to Somalia said.
The African Union’s AMISOM peacekeeping force and Somali soldiers have pushed the group, which wants to topple the Western-backed government, into smaller pockets of territory since launching an offensive last year. But the group has continued to strike Mogadishu and other government-held areas with bomb and gun attacks from bases in the southern Juba Valley and in northern Puntland’s Galgala hills, a region outside the African Union’s area of operation.
“The AU-U.N. have just done a benchmarking review of AMISOM and the Somali national army, as well, and certainly they have recognised that Puntland is an area of concern,” U.N. envoy to Somalia, Nick Kay, told Reuters on Wednesday. He said expanding AMISOM’s region of operations to the semi-autonomous region of Puntland was “under active consideration”, without saying when it might be agreed. The Somali government has said that the Juba Valley, which lies in the far south near the strategic Kismayo port, was the next target for the military offensive, but has not said when.
Puntland, which has been slowly drawing closer to the federal government in Mogadishu, has agreed to integrate 3,000 of its forces into the Somali national army, Kay said.
On the political front, Kay said Somalia was laying the groundwork for a revised constitution, although preparations had been delayed, and for parliamentary and presidential elections in 2016. He said it was still not clear whether they could be on the basis of one person, one vote. He said the government was committed to a process that is “more inclusive and more representative” than in 2012, when elders chose parliamentary lawmakers for their communities and lawmakers then chose the president. One option would be to expand the number of people choosing the president to include elders, civil society, women’s groups and others, he said, adding it was up to Somalia to decide. “We should not worry if the time that it needs to be really cemented takes a bit longer than had been originally anticipated,” Kay said. “This is a country facing many problems and challenges, but they are the problems and challenges of a country coming together, rather than falling apart.”