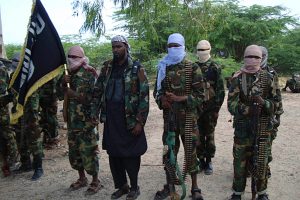 Somalia’s al Shabaab Islamists on Tuesday shot five men in a public execution, including a Somali British citizen accused of spying, a sign of the insurgents’ control of southern swathes of the country, even as authorities step up efforts to combat them, like reported by reuters.com.

Al Shabaab’s grip on the Horn of Africa nation has been weakening since it was pushed out of the capital by African Union peacekeepers in 2011, but the government and the U.S. military are beefing up an offensive against it.

“Five of them were publicly shot to death this afternoon after they admitted espionage before the court,” said Mohamed Abu Abdalla, al Shabaab’s governor for the Jubba regions.

“Awale Ahmed Mohamed, 32 spied for MI6 and he came from Britain to Somalia to establish Islamic State,” he told Reuters late on Tuesday.

Three of the men spied for the United States and helped guide drones to carry out strikes in Somalia, while a fourth spied for the Somali government, he added.

The government did not return telephone calls from Reuters to seek comment.

The U.S. drones often carry out strikes against the Somali militants, with the U.S. military saying it killed one militant in an air strike in southern Somalia over the weekend.

Al Shabaab is trying to overthrow Somalia’s weak, U.N.-backed government and impose a strict form of Islamic law. The country has been torn apart by civil war since 1991, when clan warlords overthrew a dictator before turning on each other.