You are here: Home / Africa / Somalian pirates are in Nigeria’s territorial waters and the Gulf of Guinea 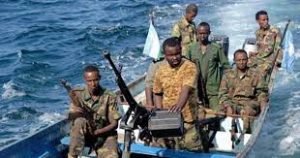 Director-General of the Nigerian Maritime Administration and Safety Agency, Dr Bashir Jamoh, has said that Somali pirates are now active in Nigeria’s territorial waters and the Gulf of Guinea, like reported by punchng.com.

He said this when the new Consul-General of the Korean Embassy, Kang Haenggu, and Ambassador-Designate of Belgium, Daniel Bertrand, paid courtesy calls on him, according to a statement.

The NIMASA boss was quoted to have said, “We discovered a correlation between crimes in our waters and the activities of the Somali pirates.

“They have a means of navigating from the coast of Somalia to Nigeria, through the waters of our West African neighbours.”

“In some cases, they enter through the land borders and commission boats to carry out their activities.”

Jamoh, however, stated that Nigeria had developed an action plan to monitor the progress of its national maritime security strategy, saying, “Our goal is to achieve a sustainable end to criminal attacks in our territorial waters.”