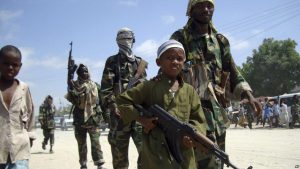 At least 15 people were killed in central Somalia when villagers clashed with Al-Shabab militants trying to recruit their children as fighters, like reported by voanews.com.

According to local sources, 10 militants and five villagers died in the fighting in Aad village, in the central Galmudug administration.

A villager who requested anonymity told VOA’s Somali Service that the militants met with local elders two days ago and sought help with the recruitment. “The fighting came after they demanded that we provide young children to fight alongside them,” he said.

He said the villagers organized themselves and decided to resist, but Al-Shabab moved into the village, and took control.

“They are using power, they want to take kids, they want livestock, the fighting is not over,” he said.

“They [Al-Shabab] want to take away their children and take them to their madrassas. The people have rejected this,” Mohamed said.

The Shabab militants say they defended the village after an attack by regional forces and killed 15 regional troops.

VOA reported last September that Al-Shabab militants have been meeting with clan elders and Koran school teachers, ordering them to provide young recruits for Al-Shabab training camps and madrassas. The move has forced hundreds of children to flee Shabab-controlled areas in Bay and Bakool regions of southwest Somalia.

Earlier this year, New York-based Human Rights Watch published a report detailing Al-Shabab’s forced recruitment and efforts to take children away from their parents and religious schools. It said children as young as eight were affected.

Three Somali soldiers and two militants died in a separate attack Tuesday near the town of Sanguni in Lower Jubba region, a military officer tells VOA Somali. A U.S. soldier was killed in an Al-Shabab mortar attack there on June 9.

Mukhtar Abdi Mohamed, a unit commander with Somali forces, said Shabab militants “sneaked along the river” and surprised the Somali troops who were having lunch in a forward outpost. He said three government soldiers and two militants died in the fighting that ensued.