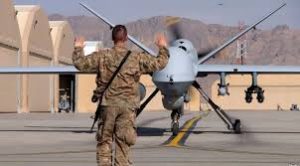 An airstrike in southern Somalia killed a senior al-Shabaab official believed to have been involved in planning a daring January raid on a Kenyan airbase that left three American personnel dead, U.S. Africa Command said according to thedefensepost.com.

“Post-strike assessments confirm the two terrorists killed in the Feb. 22 precision airstrikes were an individual associated with the attack on Manda Bay and his wife, who was also a known al-Shabaab member,” AFRICOM said Tuesday, February 25.

AFRICOM did not name those killed, but described the man as “a senior al-Shabaab leader, who was in charge of planning and directing terrorist operations on the Kenya border region,” including the recent attack on Camp Simba, at Kenya’s Manda Bay Airbase.

The press release added that his wife “was a witting and active member of al-Shabaab responsible for facilitating a wide range of terrorist activities.”

AFRICOM spokesperson U.S. Navy Lieutenant Christina Gibson told The Defense Post via email the names were not “available for release” at the time of the announcement.

The strike occurred near Saakow, which is around 320 km (200 miles) west of Mogadishu.

The announcement comes one day after local reports that a senior employee of Somalia’s Hormuud telecommunications company was killed by a U.S. strike near Jilib.

The United Nations Security Council described Hormuud as “one of the single largest financiers of Al-Shabaab” in 2012, but the company has denied working with Shabaab.

Speaking to Voice of America on Monday, a company representative also denied that the deceased employee, Mohamud Haji Sirad, had any affiliation with the Islamist group. AFRICOM said one Shabaab militant had been killed in the strike.

AFRICOM has come under scrutiny for admitting only one incident causing civilian casualties in more than 200 airstrikes in Somalia since 2007.

Data released on Tuesday by Airwars suggests the number of civilian casualties in the U.S. air campaign is likely orders of magnitude higher than what AFRICOM has reported.

The U.S. conducts targeted strikes against al-Shabaab members and affiliates in support of Somalia’s Federal Government in coordination with the African Union Mission in Somalia (AMISOM).

Somali National Army forces, who receive training from the U.S., Turkey and other countries, have struggled to establish control of rural areas outside of the capital, Mogadishu, according to a recent Pentagon report.

Al-Qaeda-affiliated al-Shabaab was routed from Mogadishu in 2011 by the now 20,000-strong AMISOM mission. The group has had to abandon most of its strongholds but it still controls vast rural areas and remains the key threat to peace in Somalia and has carried out a number of deadly attacks in neighboring Kenya.