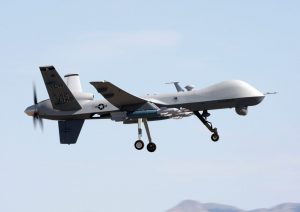 US Africa Command (AFRICOM) announced on Tuesday it had carried out an airstrike against a senior leader of the Islamist militant group al-Shabaab.

According to a news release, AFRICOM carried out an airstrike near the southern Somali town of Saakow, in Somalia’s Middle Juba region, which it said was believed to have killed one terrorist.

The Germany-based command announced just five days earlier another airstrike targeting another member of al-Shabaab alleged to have been making explosives to be placed by roadsides. That strike was assessed not to have killed any civilians, just as the Tuesday attack was.
AFRICOM is required to print quarterly reports on its operations, evaluating attacks for possible civilian casualties; however, the US’ method of authorizing such airstrikes leaves little to no consideration for possible civilian casualties, just the possibility of killing the targeted militant, so such immediate casualty assessments are worth little.

The US’ undeclared war in Somalia is justified by the 2001 Authorization for the Use of Military Force Against Terrorists (AUMF), which gave broad power to the Pentagon to stage attacks against al-Qaeda and its affiliates, such as al-Shabaab, in the wake of the September 11 terrorist attacks.

According to the Tuesday release, AFRICOM coordinated the airstrike with the Somali government in Mogadishu.

Since 2015, al-Shabaab has not controlled any major city, but it is still able to exert influence in the countryside, particularly the coastal Lower Shabelle region, where the authority of the central government remains weak after decades of civil war.