You are here: Home / Africa / Somalia, the pirates adapt to failure and new opportunities 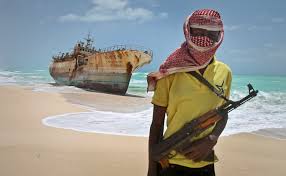 Financial problems have led the Somali pirate groups to have largely disbanded. The problem is that no large ships taken (and ransomed) since May 2012. The pirates captured 14 ships in 2012 . In 2011 28 were taken and before that in 2010 47 and in 2009 there were 46. Each of these ships yielded, on average, several million dollars in ransom. That kind of money attracted a lot more people to the business. Lack of that kind of money led the major pirate gangs to disband. Despite that shipping companies have been warned to maintain the expensive security measures they have been using until the “pirate coast” of Somalia is cleared of warlords, Islamic terrorists and criminal gangs. At that point the shipping companies can eliminate the expensive security measures and people living in East Africa and dependent on goods imported via ship will see prices go down to pre-2006 levels. The cost of the additional anti-piracy measures was passed on to consumers and it is noticed.

Meanwhile piracy has shifted to Southeast Asia and the coast of Nigeria, where 13 small tankers and cargo ships were taken during the first half of 2015. During that period pirates attacked 134 ships compared to 116 for the first half of 2014. Most of these attacks are robbery and assault on crews as well as kidnapping of a few officers. In the first half of 2015 pirates temporarily held (and robbed) 250 merchant sailors, assaulted 14, (injured nine and killed one) and kidnapped ten for ransom.

Meanwhile it’s been so bad for the Somali pirates that even taking smaller fishing ships and dhows (small local cargo ships of traditional construction) has become more difficult. The collapse of the Somali pirates since 2012 was no accident. It was all a matter of organization, international cooperation and innovation. It all began back in 2009 when 80 seafaring nations formed (with the help of a UN resolution) the Contact Group on Piracy off the Coast of Somalia. The most visible aspect of the Contact Group was the organization of an anti-piracy patrol. This came to consist of over two dozen warships and several dozen manned and unmanned aircraft, as well as support from space satellites and major intelligence and police agencies.

The anti-piracy patrol nations came up with more and more solutions than the pirates could handle. Thus the pirates found themselves with fewer and fewer options and opportunities. The most visible result for the pirates was that ships became more difficult to find, board and capture. That was because since 2011 more and more merchant ships trained their crews to deal with pirates. This involved basic stuff like paying attention to Contact Group bulletins on piracy off Somalia and posting more lookouts when in waters designated as “pirate infested.” The most valuable ships carried armed guards who fired back at approaching pirates and that has always driven the pirates away. The pirates eventually began operating as far east as the coast of India and ships that did not pay attention to Contact Group bulletins sometimes found themselves under pirate attack where they didn’t expect it. This was handled with expanded patrols, especially using manned aircraft and UAVs. The naval and air patrols became more efficient and effective and there was more and more cooperation between the ships from dozens of nations contributing to the patrol.

One of the more unnerving tactics was monitoring the pirate ports and following ships that left. UAVs or ships would observe these vessels and once they were in international waters (22 kilometers from the Somali coast) board and search any suspected of being pirates. If weapons and boarding equipment was found, the pirates were detailed, taken back to Somalia and left on a beach. Their boat was sunk at sea, along with their weapons and tools. Documents found on the boat were passed on to intelligence specialists. This degree of scrutiny was more than the pirates could handle. The pirates needed cash to keep operating as each multi-million dollar ransom quickly disappeared into the pockets of the pirates and their financiers and suppliers. Few of the pirate leaders wanted to invest their newly acquired wealth in keeping the level of activity where it had been until 2012, when it became clear that capturing more ships was frustratingly difficult and eventually nearly impossible. So the financing of the pirate gangs disappeared and most of the pirate gangs dissolved or went back to smuggling people to Yemen or what many of the pirates originally did; fishing.

Life was not difficult just for the pirates, but also for their financial advisors and suppliers (of cash, supplies and information.) Eventually the pirates found there were few people they could trust or rely on and the once lucrative pirate “industry” in northern Somalia collapsed. Currently the pirates are not holding any ships or sailors they can get a ransom for. Some pirates are still there, and until this generation dies out there are still men who remember how lucrative it could be when there wasn’t such an efficient Piracy Patrol out there. For that reason the Piracy Patrol keeps getting extended another year, and will probably continue for a few more. The seafaring nations are hoping that real government will return to Somalia, a government that will make it impossible for pirates to anchor hijacked ships off the coast without fear of interference by local police or coast guard.

These days the ships are most in danger of hijacking while off West Africa in the Gulf of Guinea. Most of the pirates there are Nigerians and they attack and briefly hijack ships that are vulnerable. The Nigerian pirates have no safe place to keep captured ships while a large ransom is negotiated. Instead they rob ships they attack and quickly leave. In some cases they arrange to hijack much of the cargo, usually at sea, by transferring to another ship at night and then scampering away before the navy or police show up. This temporary hijacking is also popular in Southeast Asia, but not nearly as expensive as it was off the Somali coast.