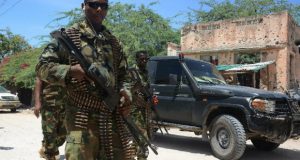 Somali security forces executed a raid against the Al Shabab organization in this capital, following the most recent attacks by the armed group, press reports stressed.
According to Radio Shabelle, the actions were carried out again in the Kahda neighborhood, in the south of the city and caused an unknown number of wounded.

Last week the intelligence services operated against the faction in the Kahda neighborhood, after a series of attacks perpetrated in that area.

Somalia faces an escalation of attacks by Al Shabab, both in this capital and in other areas of the southern region, recalled other media, highlighting the persistence of the actions of the armed group that confronted the central authority to which it does not recognize legitimacy.

Last November, the Prime Minister of Somalia, Hasan Ali Jaire, promised that he would eliminate that militia and that he would do everything possible to expel it from the areas it controls in the south and center of this country.