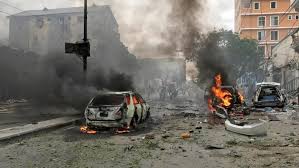 The blast targeted “a convoy on the road between Dhobley and Hosingow Tuesday, 2nd attack on KDF in Lower Juba region, south of #Somalia in 24hrs,” radio station Garowe Online tweeted about the attack in the vicinity of Hosingow, Middle Jubba near the Somali-Kenyan border.

Officials in the region confirmed the attack to Anadolu Agency but did not disclose casualty figures.

Al-Shabaab claimed it killed 17 Kenyan soldiers in a bomb attack Sunday near the town of Dhobley, Lower Juba, located 191 kilometers (118 miles) from the port city of Kismayo, the administrative capital of Jubaland.

At least two people, including a police officer, were killed and seven were others wounded in a landmine explosion on Monday that targeted a vehicle carrying police officials in Mogadishu’s Dharkinley district.