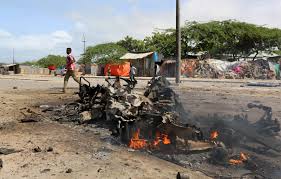 A governor in Somalia’s Puntland was killed in a suicide bomb attack, witnesses said, in an attack claimed by the jihadist group al-Shabaab, like reported by thedefensepost.com.

The attack on Abdisalan Hassan Hersi, governor of the Nugaal region, happened in Puntland capital Garowe on March 29, said officials.

“The doctors tried to save the governor’s life but unfortunately he died from his injuries,” Mohamed Weli, a police officer in Puntland, told AFP by phone.

A source at the hospital, who did not wish to be identified, said the governor died less than an hour after being admitted to the intensive care ward.

“He was badly wounded in the blast and he had little chance of surviving such serious injuries,” the source told AFP.

A former police commander and a civilian were also wounded in the blast, and all three were being treated in hospital, Puntland’s interior minister, Mohamed Abdirahman, told reporters.

Witnesses said the attacker ran at the vehicle in which he was traveling before detonating his explosive vest.

“The governor and the former police commander were wounded seriously in the blast, the police sealed off the area after the blast,” said one witness, Adan Suleyman.

Abdikarim Ahmed, another witness, said the bomber ran on to the vehicle of the governor as he was parking near a police station before detonating his device.

The jihadist Shabaab group claimed responsibility in a statement.

Al-Qaeda affiliated al-Shabaab has fought to establish an Islamic state in Somalia since 2006. The militants were largely routed from Mogadishu in 2011 by the African Union’s Mission in Somalia (AMISOM) but they still control significant rural areas.

The group claimed responsibility for a massive car bomb in Mogadishu in late December that killed at least 90 people, the worst attack in the capital since 2017. Earlier that month, the militants stormed a Mogadishu hotel frequented by government officials.

In January, Shabaab fighters staged a brazen raid that penetrated the perimeter of Kenya’s air base at Manda Bay, killing ten civilians and one U.S. military member.