You are here: Home / Africa / Somalia: nine Islamist Al-Shabaab militants killed in a foiled attack on a police post 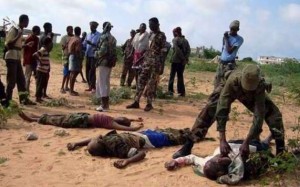 The African Union Mission in Somalia (AMISOM) says nine Al-Shabaab militants were killed in a foiled attack on a police post, like reported by xinhuanet.com .

The AU mission said that Al-Shabaab militants had attempted to attack the police post in Afgoye, a town about 30 km south of the Somali capital, Mogadishu, but were repulsed. Nine militants were killed in the fighting.

According to AMISOM, improvised explosive devices which had been planted by the militants were identified and removed.

It said the joint forces were currently continuing with security operations to flush out the insurgents out of the restive town, which has seen fighting between the AU troops and the militants in the past week.

The Wednesday evening incident came hours after twin car bomb blasts claimed by the Al-Shabaab extremist group struck a hotel near Somali Parliament in Mogadishu, killing at least 15 people and injuring 51 others.