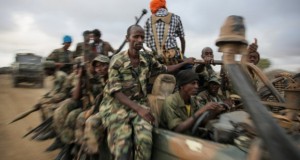 Somali President Hassan Sheikh Mohamud launched a national strategy to counter violent extremism in the Horn of Africa nation which has been grappling with frequent terror attacks.

Mohamud said the Comprehensive National Strategy on Preventing and Countering Violent Extremism (P/CVE) for Somalia is in line with the United Nations’ call to the member states to develop national strategy for CVE.

“I am very pleased that Somalia now has a comprehensive national strategy on P/CVE, which will greatly help us to reduce violent extremism and at the same time to better coordinate all programs and activities relating to Preventing and Countering Violent Extremism,” he said during the launch in Mogadishu.

Mohamud said majority of Somalis have denounced violent extremism, and the strategy has been developed in consultation with government officials with the active involvement of regional administrations as well as civil society.

The Somali leader said his government also carried out an online public consultation in order to reach out to all citizens including Somalis in the diaspora.

“This will be based on a better understanding of the process of recruitment and the drivers of violent extremism as well as the development of sufficient capacity to support resilience within communities so they can live and prosper in a more peaceful Somalia,” said Mohamud.

He said the national strategy will be regularly updated based on assessments that evaluate government’s implementation efforts, measure the impact of those efforts, account for new findings and data from research and take into consideration any significant changes that have occurred in the threat or information landscape.

The president added that this strategy will serve as an integral part of national security.

“Violent extremists are also actively recruiting children, some of whom are barely teenagers; therefore, it is our own national interest. Furthermore, military alone cannot bring peace and stability and that is why we needed prevention and countering of violent extremism in our country.”