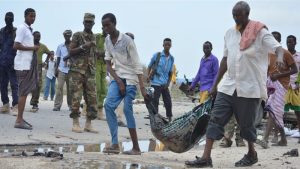 A roadside bomb explosion has injured several people in the Somali capital.

The blast reportedly targeted a Somali National Army vehicle passing at Jamhuriya road in Kaaraan district but exploded after the vehicle passed.

Several people who were on board rickshaws on the road were reportedly injured and some rickshaws destroyed by the blast.

No group has claimed responsibility for the explosion but the Al-Qaeda-linked group, Al-Shabaab, regularly targets Somali security forces in Mogadishu and other areas in the country.