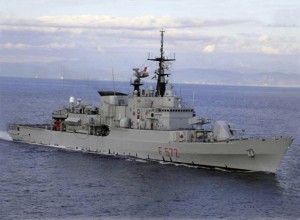 Operation Atalanta warship, ITS Libeccio, carried out counter-piracy training with the Royal Omani Navy during a port visit to Salalah.

As part of the training, the Italian marines gave a demonstration on how to search a suspect vessel, including the bridge and cargo areas.

On completion of the training, the Omani sailors thanked ITS Libeccio’s crew for the training and stated that they would welcome further training in the future as a way of strengthening mutual cooperation between the European Union and Oman.

The visit concluded with the commanding officer of ITS Libeccio, Commander Daniele Paolo Maria Martinuzzi, meeting local government officials, who expressed appreciation for Operation Atalanta’s efforts to deter and disrupt piracy in the Gulf of Aden and Indian Ocean.