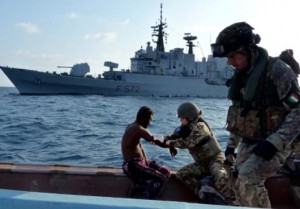 At the start of the exercise, the Italian and Omani Navy boarding teams demonstrated their respective tactical procedures, including the way in which their boarding teams would identify and search a suspect vessel.

The second phase of the exercise, which was conducted at sea, saw both ITS Libeccio and RON Al Rahmani performing ship manoeuvres, which provided excellent training for the ships’ bridge teams.

On completion of the exercise, both teams stated how invaluable the joint training had been, and the desire to conduct further training in the future.

These types of exercises are an excellent way to strengthen cooperation, mutual understanding and friendship between the Royal Omani Navy and the EU Naval Force.

They also, when requested to do so, and within means and capabilities, also support other EU missions and international organisations, such as the UN to strengthen maritime security and capacity in the region.