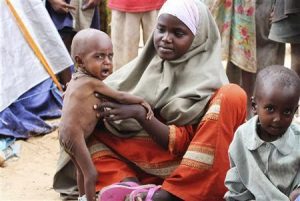 Lack of access to hungry parts of Somalia controlled by Islamist militants is threatening the lives of tens of thousands of malnourished children, a charity said to reuters.com, as the war-torn nation risks falling back into famine.

Severe Acute Malnutrition (SAM), often fatal without medical care, has “skyrocketed” to more than three times the emergency threshold of two percent in Hiraan region’s Mataban District, a survey by Save the Children found.

“Scaling up to provide services to everyone affected is a challenge because we have around two million people living in al Shabaab controlled areas,” said Hassan Noor Saadi, Save the Children’s Somalia country director.

“Getting aid to them is not easy.”

Al Shabaab militants ruled most of south-central Somalia until 2011, when they were driven out of the capital Mogadishu by African Union troops, and still carry out major attacks.

In 2011, some 260,000 Somalis died of famine caused by drought, conflict and lack of access to humanitarian aid.

“When animals die, there is no food, no milk, and no assets to make money off and subsequently buy food,” he told the Thomson Reuters Foundation in a phone interview.

“If these children are not given special foods to help them recover, their immunity will go down and they will become prone to opportunistic diseases,” Saadi said.

“They can either die from these diseases or from hunger.”

Some 714,000 Somalis have fled their homes due to drought and failed crops since last November, joining 1 million previously internally displaced Somalis, the U.N. says.

Aid agencies are also struggling to save lives across the border in Ethiopia’s Somali region, where nomads whose livestock have been killed by drought have settled in informal camps.

Medecins Sans Frontieres teams have treated more than 6,000 children with severe acute malnutrition in the area since January, a tenfold increase on 2016, the medical charity said on Monday.

“These numbers are the highest our teams there have seen in ten years,” MSF spokeswoman Rosie Slater said in emailed comments, adding that 67 children died in June.

“An acute humanitarian emergency is unfolding.”