“We are taking them for Jihad,” al Shabab militants reportedly told teachers at a school in Somalia, like reported by dw.com 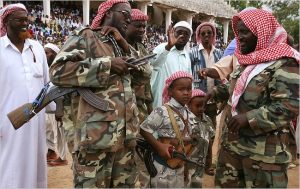 The militantsare demanding children aged between eight and 15 years for recruitment into the group, Human Rights Watch (HRW’s) regional office in Kenya revealed. HRW says that the recruitment started in mid-2017 and has so far gathered thousands of children for indoctrination after terrorizing elders, teachers in Islamic religious schools, and communities in rural areas.

According to HRW, the armed group has opened several training centers, under the guise of being religious schools in areas under their control. They use strengthened indoctrination, they teach children of a very young age and have pressured teachers into teaching al Shabab approved programs in schools.

“The last two years have seen a dramatic increase in the abduction of children by al Shabab,” explains Zama Neff who heads the children’s rights division of Human Rights Watch. “Children have been taken from their schools, from their homes and from the streets. Nowhere is safe.”

HRW documented that in September 2017 al Shabab fighters forcibly took at least 50 boys and girls from two schools in Burhakaba District and transported them to Bulo Fulay, which witnesses say hosts a number of religious schools and a major training facility. The militants came two weeks later to the same village where they demanded 25 more children. Residents say that even though the militants didn’t give a reason for taking the children, they know that it’s because they want to indoctrinate and recruit them.

“Al Shabab has forced children to service fighters in its ranks, sending them to the frontline, strategically placing them in front of adult fighters to protect them,” Neff says. “They are cannon fodder.”

As a result many children have had to flee from their homes. In August  2017, an official from the coastal town of Adale in Middle Shabelle told the media that his community was harboring around 500 children. Most of them were between the age of 10 and 15. They had fled forced recruitment in the neighboring regions of Galgudud, Hiran and Middle Shabelle. According to HRW, these children end up in dire conditions in internally displaced persons (IDP) camps where they are unlikely to find security or schooling and may be forced to work to survive.

“The government and international actors need to make sure that the children that have been displaced are receiving protection and access to education,” Laetitia Bader, senior Africa researcher at Human Rights Watch explains. She called on al Shabab to stop the recruitment of children, and said that the government or other actors in charge on the ground should take measures to curb the militants’ operations.