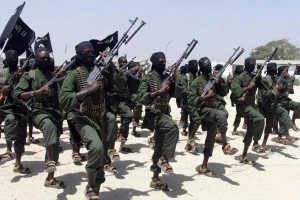 Al-Shabaab militants have been training clan elders in southern Somalia on how to use guns to shoot accurately, in the latest attempt by the jihadists to win the hearts of residents, media outlets affiliated by the group have reported according to theeastafrican.co.ke.

A radio station and a website operated by the al-Qaeda-affiliated militants have broadcast and published pictures of elderly men holding guns in what appears to be a shooting range, as a huge crowd looks on.

Radio Andalus said about 40 elders from different clans took part in the shooting competition which involved men between the ages of 60 and 80 in Jilib, Middle Jubba Region, southern Somalia.

“Each elder was given three bullets to fire to a target placed 60 steps away,” a reporter with Radio Andalus said.

“Every elder was carrying an AK47 rifle… the elders had practised shooting before the contest.”

In one of the photographs, three men are seen lying on the ground aiming at targets, while some, standing, appear to be coaching.

“I want to be in the frontline for the mujahidin,” a man told Radio Andalus.

“It is the responsibility of each and every individual to defend their country from the invading foreign troops,” another said.

The Islamic militant group often holds events to seek the support of the residents in the areas that the militants control.

In the past, they have organised various sports activities, including arrow shooting, tug of war and breaking of mud pots.

In other parts of the country, however, they have been behind a campaign of terror which has left thousands dead.