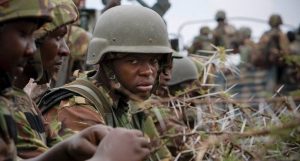 An improvised explosive device ripped through the military vehicles while the KDF were crossing the border en route their military base on the outskirt of Dhobley, in Lower Juba Region, Somalia. Nine KDF soldiers were killed and some 15 others injured in the attack.

Al-Shabaab has claimed responsibility for the attack.

“Earlier today, I was appalled and saddened to learn that we had lost nine young patriots to a cowardly terrorist attack in Somalia,” Uhuru Kenyatta, Kenya’s president, said in a statement.

“These men gave their lives for their country, and for peace; we must, and we will, honour their service, their sacrifice and their valour,” Kenyatta continued.

“Everything will continue until the evil terrorists of Al-Shabaab are defeated, and the people of Somalia are safe once more. We owe victory to the fallen. You may be sure we will win, for we have right and might on our side.”

The uptick of violence has prompted the African Union Mission in Somalia (AMISOM) to beef up pre-emptive attacks against Al-Shabaab. AMISOM forces believe that Al-Shabaab is to increaseattacks during the Islamic holy month of Ramadan, which will begin in mid-May. The usual targets are market places, hotels and AMISOM military bases.

The commander of the Ugandan forces, part of the AMISOM mission, called on AMISOM troops to be vigilant and reinforce security with local residents to thwart attacks.

Al-Shabaab has been subject to attack by the AMISOM, backed by some regional states in Africa. The United States has also executed 745 targeted drone strikes and counter-terrorism raids to neutralise threats across Somalia since 2004.