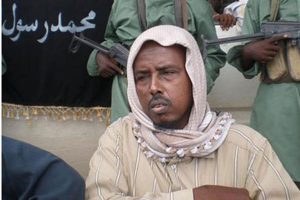 The Somali Islamist militant group Al-Shabaab has confirmed the killing of its senior operative Sheikh Ali Mohamed Hussein alias Ali Jabal, in a US air strike, like reported by theeastafrican.co.ke.

The group confirmed the death in a message of condolence and congratulation to Muslims, through its media outlets.

“This is a message of congratulation and condolence in regards to the martyrdom of Sheikh Ali Mohamed Hussein,” it said.

“We are relaying our condolences to all members (of Al-Shabaab) about the death of a fallen hero,” the message widely quoted by the local media said.

It confirmed a claim in early August by the US and Somali governments of the death of the man who had directed the Al-Shabaab operations in the Somali capital for nearly a decade.

The Al-Shabaab had remained quiet about the reported death for more than three weeks.

Until his killing by a missile fired by a US drone on July 30, Hussein was in charge of the Al-Shabaab’s Mogadishu operations.

The Somali government early this month stated that it authorised an operation with a friendly force (the US) near Toro-torow, about 70km southwest of Mogadishu, believing that it neutralised the Al-Shabaab governor for Banadir (Mogadishu and the surrounding areas).

The American military Africa Command (Africom) stated: “The US conducted this operation in coordination with its regional partners as a direct response to Al-Shabaab actions, including recent attacks on Somali forces.”

“His (Hussein’s) removal disrupts Al-Shabaab’s ability to plan and conduct attacks in Mogadishu and coordinate efforts between Al-Shabaab regional commanders,” it added.

The Al-Shabaab’s Sunday message stated that a first strike against Sheikh Hussein missed the target, but a second one killed him and his 12-year-old son.

“With this passing away, Sheikh Hussein ascended into martyrdom,” the jihadist message concluded.