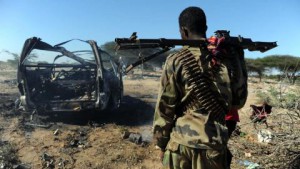 Four soldiers were killed and six others injured in an attack by Al-Shabaab in Somalia’s Gedo region.

The offensive began after the militants attacked positions of government forces in the region’s Ged-Wayn district on Thursday, Xinhua quoted a local official as saying.

“We have managed to inflict heavy casualties among the attackers… The fighting lasted several hours. We do not know the number of their dead,” he said.

Earlier in the day, the militant group raided the headquarters of the ongoing state formation conference in the town of Adado.

Eight of the attackers were killed, according to local authorities.

Al-Shabaab has reportedly vowed to step up attacks on government bases and African peacekeeping forces in Mogadishu during the holy month of Ramadan.