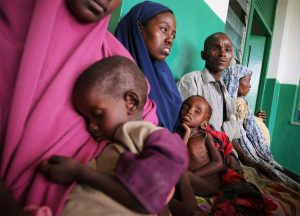 Somalia’s al-Shabab militants have been distributing food to drought-stricken Somalis in what appears to be a bid to win public support, like reported by bbc.com.

A similar initiative by the militants during the last famine in 2011 failed to boost their image. Not only did the UN blame al-Shabab for contributing to the 2011 famine but their acts of sabotage lost them public support.

The al-Qaeda-affiliated Islamists blocked aid deliveries, burned food and even killed charity workers. More than 260,000 people died in that famine. Al-Shabab militants had undermined their own attempts at presenting a charitable image of themselves.

The UN has appealed for $863m (£700m) for the country and in an echo of the past, state-owned Radio Mogadishu recently accused the group of hindering relief efforts.

Could al-Shabab have learned from its past mistakes?

There are some signs that it has. The militants now want their efforts recognised favourably but they are still contemptuous of Western humanitarian organisations.

Al-Shabab says it has established drought committees to coordinate relief operations in six administrative regions. It constructed canals for farmers in some regions, as reported in September by the pro-al-Shabab radio, Al-Furqaan.

A new leader has taken over al-Shabab since Ahmed Abdi Godane was killed in a US airstrike in 2014.

While Godane was from the north, the majority of al-Shabab fighters are known to be southerners, with clan and family links to areas where the drought has hit hardest.

The current leader, Ahmed Omar, alias Abu Ubaidah hails from Kismayo and his deputy Mukhtar Robow alias Abu Mansoor is from Bay region – both in the south of the country.

It was Godane who led al-Shabab into a formal alliance with al-Qaeda in 2009. And it was he who was was in charge of the group when it attacked humanitarian operations in 2011.

What is al-Shabab’s approach?

Al-Shabab has embarked on a publicity campaign to announce details of its donations.

Somali Memo website published several unverified pictures on 6 March of what it said were al-Shabab militants distributing food to residents of Lower Shabelle region. Some of the footage showed trucks filled with what appeared to be food bags. One 50-kg bag was branded “product of Brazil”.

Al-Shabab blames others for problems, including its foes from the African Union mission. Somali Memo website reported last April that aid was given to families in Gorome village which is “home to many people who fled there.. after Ethiopian troops burned down their homes”.

The group shows how it considers other needs beyond food. In Bakool, 80 families each received half a sack of flour, a sack of sorghum, 12kg of sugar, medicinal drugs, rugs, and plastic sheeting to protect them from the rain”, the website added.

It attempts to display an understanding of how much is needed. In Celbuur district, 230 families allegedly received aid from al-Shabab. “Each family received 25 kg of sugar, 25 kg of rice, 25 kg of flour, and two plastic containers of cooking oil. The food is enough to last more than a month,” Somali Memo website reported in March.

There are other reports of of al-Shabab’s charity work.

But aid to a few hundred families will not make much difference when the UN says that more than six million people in Somalia need assistance.

Can al-Shabab afford the food aid?

Al-Shabab says it buys some of the food from local markets. But its financial situation is unclear.

Through Radio Andalus, it has broadcast appeals to “business communities and the wealthy to assist their brothers” by donating food.

Al-Shabab’s economic fortunes have dwindled since it lost control of the capital, Mogadishu, in 2011 and the lucrative southern port city of Kismayo a year later.

The group still controls rural areas in parts of central and southern Somalia and gains revenue from illegal taxes levied on local communities and businesses.

In February, the UN said thousands of women and children had fled drought-hit Bay and Bakol regions into Ethiopia because the militants were taxing them and seizing their food, animals and land.

In March, al-Shabab militants burnt down a village on the outskirts of Jowhar, one of the areas worst hit by drought.

Al-Shabab “loaded tonnes of food and private property onto vehicles before setting the village on fire” and local authorities described the looting as “shocking”, Garoweonline website said.

Such attacks are likely to overshadow al-Shabab’s aid efforts.