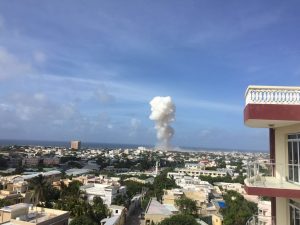 At least three mortar shells hit the Halane base camp in Mogadishu, which houses African Union Mission in Somalia (AMISOM) troops and western diplomatic missions, causing a number of casualties, media reported on Tuesday, citing a source within the facility, like reported by urdupoint.com.

According to the Garowe news website, the attack took place ahead of planned key talks on finding ways out of Somalia’s election crisis in the vicinity and seemed to aim at disrupting the negotiations.

“Source: four [mortar] rounds hit army base camp in Halane. One person injured is confirmed,” the official wrote on Twitter.

The legislative and presidential elections in Somalia were initially scheduled to be held last year but were put off several times due to the COVID-19 pandemic and clashes with jihadist militants from the al-Shabab terror group, linked to al-Qaeda (terrorist organization, banned in Russia).

The talks between the central government and all five Federal states to organize the presidential election to replace incumbent Mohamed Abdullahi Mohamed, in office since 2017, have been stalled since the country passed an agreed-upon election deadline, February 8.