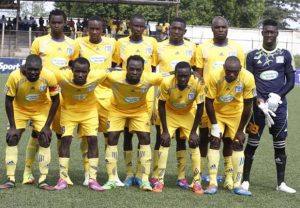 A former footballer on a police list of most wanted terrorists was among Al-Shabaab fighters killed in battle with Kenyan troops in Somalia last month.

Anwar Yogan Mwok, who played for Mathare United, was killed as he rode in a truck laden with explosives at the Kulbiyow Kenya Defence Forces camp on January 27, like reported by nation.co.ke .

Two other Kenyans – Ramadhan Kufungwa and Erick Achayo Ogada – also took part in the raid and it is believed they were injured in the fighting.

Security agencies have warned that the two may be sneaked back to Kenya for treatment.

Police had last year offered Sh2 million to anyone with information that would help in their arrest.

A dispatch shared among security agencies and seen by the Nation said: “Information from Kulbiyow Somali has revealed the direct involvement of Kenyan terrorist fugitives some of [on] whom the government has placed a bounty of Ksh 2 million.

“They included Anwar Yogan Mwok, Anwar Yogan was in one of the lead Vehicle Borne Improvised Explosive Device VBIED that targeted the KDF camp. He was killed by the heavy artillery fired by the KDF and died instantly.

“Ramadhan Kufungwa and Erick Achayo who were among the Al Shabaab infantry suffered serious injuries and reliable sources have indicated that their Kenyan associates and family members are trying to sneak them into the country for medical care.”

He lived in Umoja Estate with his family until 2013, when he left for Somalia to join Al-Shabaab.

In Somalia, he joined Jaysh Ayman, a group of largely Kenyan Al-Shabaab fighters who plan and execute attacks against innocent Kenyans within the country.

Mwok owns a “significant amount of properties within Umoja area in Nairobi, proceeds from which Police has indicated has been financing his terror activities targeting Kenya,” the document adds.

He also linked to the recruitment of young people into Al-Shabaab.

Mwok was linked to the Mpeketoni terrorist attack in June 2014 and the raid at Baure military camp, Lamu, in June 2015.

The other suspect, Kufungwa, 50,  was born in the Kibundani area of Ukunda, Kwale County.

“In 2011 he is believed to have travelled to Somalia where he stayed for four months. He returned to Kenya and was among students of slain clerics Aboud Rogo and Abubakar Shariff aka Makaburi,” the report says.

It added: “Before going back to Somalia in 2013, Ramadhan Kufungwa used to conduct radical teachings at Musa and Sakina mosques in Mombasa.

“Together with Abdifatah Abubakar Ahmed and Ahmed Iman Ali are the leading individuals in Al-Shabaab responsible for continued disappearance of Kenyan Youth who end up in the frontline of the Al Shabaab attacks on Kenyan interests and facilities.”