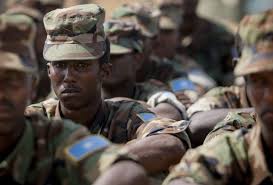 The Somali army destroyed a major camp of the Islamic extremist group Al Shabab near the town of Diinsoor, southwest of the country, today said a military source

Sheikh Mohammed Abdullah, a spokesman for the troops government said that in the heavy fighting that took place in Bay region, 4 fundamentalist rebels died and no casualties were reported among the soldiers.

On Tuesday the Somali army attacked positions of Al Shabab and regained Gandershe Control and Amara, cities located in the southern region of Lower Shabelle.

A week before these forces it launched an operation against the group in Hudur area bordering Ethiopia.

Al Shabab, which official name is Harakat al-Shabaab al-Mujahideen (HSM) or Islamic Youth Movement, emerged in the middle the chaos in Somalia in 1991 after the fall of the regime of Mohamed Siad Barre.

It aims to create an Islamic emirate based on the strictest interpretation of Sharia or Islamic law in February 2012 and announced its alliance with Al Qaeda.