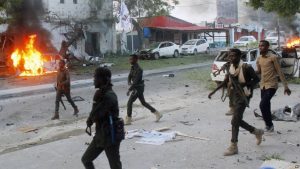 Officials in Mogadishu, Somalia’s capital, say a car bomb has hit a district headquarters, like reported by voanews.com.

“The blast was huge,” police officer Ibrahim Mohamed, told the French news agency AFP. “The Initial information we are getting indicates it was a car loaded with explosives that targeted the Hodan district headquarters.”

The officer said a vehicle rammed into a security checkpoint before exploding Monday.

There was no immediate report on the number of casualties.

The explosion was the second such attack on a district headquarters this month in the capital.

There has been no immediate claim of responsibility for the blast.